From the Artistic Director

The Episōdos on Discursive Justice 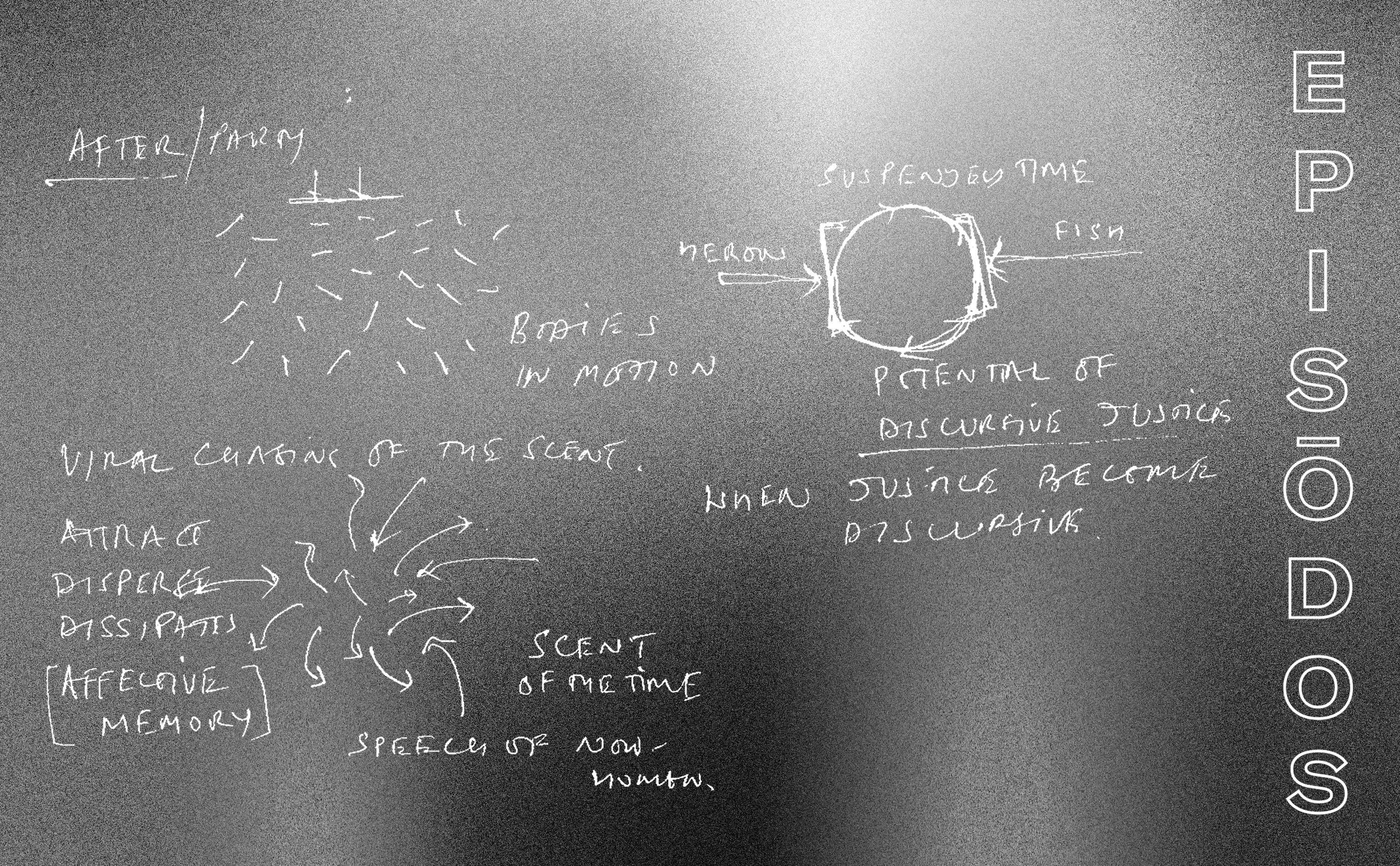 The Yokohama Triennale 2020 initiates Deliberations on Discursive Justice as a transcontinental tributary which will investigate, write, and perform the aporias arising from assertions to equality. These are claims made with bodies, with words, with sounds, with costumes, with images, with instruments, and with shifting forums. The tributary draws from the insights of a minor strand in legal theory, which engages with the way people have been able to transform the courtrooms as forums to speak, and have been making the act of speech itself as the site for claims to justice.

The Artistic Directors of the Triennale, Raqs Media Collective, in continuing with their search for a modality to build a shared milieu of sources, itineraries and conversations, instigates an experimental constellation of artists and curators to inquire into the sound of a widespread murmuration — and storm — of life, and propose a framework of acoustic equality and fraternity between different kinds of speech acts and voices, between different modes of speaking and producing unusual forums and moments of pause, acceleration and contemplation.

These deliberations on discourse and equity, words and hunger, speech and bodies will evolve through the ensemble constituted of Michelle Wong (Hong Kong), Lantian Xie (Dubai), and Kabelo Malatsie (Johannesburg). Through a series of Episōdo(s) hosted in various cities, and of differing style and duration, the ensemble will unfold a quiet and intense occupation of time and attention to explore the entanglement of discourse and sources, justice and equity, and speech and forums. They will manifest a discursive claim that needs to be addressed on its own terms. It will be formulated as parrhesic and possessed speech, and with attentiveness to obstinate silences and enigmas.

“There are songs for equality all over the world. Millions march down roads in Hong Kong. Thousands in South Africa discuss consent on twitter. Women run households via smartphones from makeshift protest-tents blocking a highway in Delhi. Continuously unfolding events empty out prevailing discursive logics and rhetoric, populating the world with divergent sets of protocols and urgencies. Who hears, how is it heard, how is it not heard, and how is it read? The street makes itself a theatre of speech acts. The decisive question of “hearing” is to be deliberated on.

These brewing situations open a terrain of justice. They are intangible courts of poetic appeals, of argumentation through myths, stories, and care, and are not daunted by the Law; law is but one dialect. They are aware that law can act as a sanitation regime—hearing only its own voice, rendering all else as noise. But justice is a different language, one with which to break down the world and put it back together again. Prevalent discursive advantages are challenged with new ways of inhabiting the world.

We propose a party, a scenography, and a chase, as ways to enter this ferment and further the deliberation.

We call in the carnivalesque and the masquerade, draw in the middle earth of healers and shamans, play with technologies of renewal and admittance, work with appeal, apology, gratitude, and indebtedness, practice the art of counter-monuments, and pose the discursive as a site of stakes & wagers, codes & limits.

We work through Episōdos as devices to weigh moments when justice becomes discursive—to make them matter to our thoughts. We design them to merge the boundary between the curatorial and the artistic, and as a way of intimating an engagement that will shape the coming decade.”

In Hong Kong, Episōdo 01: Afterparty happens at the wrong time in the wrong city, with Phatstoki levitating a crowd with Gqom’s urgent and relentless energy accompanied by Fotan Laiki. Nearby, Jerome Reyes hangs a banner off the side of a building asking a riddle for lightning and haze.

In the backyard pond of a house, a heron comes to fish by drawing its wings together to shape an umbrella and create shade so it can see the fish. And then, it waits. In this moment of suspended time, neither is perpetrator or victim. Episōdo 02: Scenography for Suspended Time is a contemplation on the possibility of a paradigm outside relationships of reward and retribution, and to include other procedural forms to settle disputes. Protagonists include:heron, fish, Nanni, Kinoshita Takahiro, Mr. King, Pushie the cat, Johannesburg.

We gather insights from Hong Kong and Johannesburg, and enter Yokohama via Episōdo 03: Chasing the Scent, a cascading rain of wardrobes, protagonists, calls, songs, letters, images, and interruptions that meet ideas of evidence and archive like a story we once overheard on a bus: some elephants wandered to a small island and swam so far that they forgot the shape of their origin. They made new paths.

We’ve put together a collection of prompts, audio snippets, notations, fragments, loose particles, and field recordings drawn from our ongoing deliberations. Designed in the manner of a sample pack of the sort used in music production, these materials are pliable building blocks not yet consolidated into a set form. Download link here.

With this, we invite responses, riffs, and contributions to this chase, which we will parse through the exhibition as readings, appearances, and as part of the Triennale’s latter Episōdos. Email us at pictureoftheturningsphere[​at​]gmail.com to join the chase.

Episōdo 03: July 2 to end of the exhibition phase of the Triennale, Yokohama.